Meet Diane Demetre. From a career on stage as an actor, dancer choreographer and director to exploring her passion for writing murder mysteries that dig deep into human psychology--she's had quite a journey! Her recent release Evil on the High Seas, the first in the Diana Daniels mystery series, is an intriguing mystery set in the Galapagos Islands. Read on to find out about her books, reading habits and what advice she has for aspiring authors.

Hello, Welcome to the Crazy Curious Reader! It’s a pleasure to have you here as our interview guest. Let’s start with introductions.

I grew up in a working-class suburb of Brisbane, Australia where, after wiggling my nappy off at the age of two in front of the radiogram, my parents sent me to ballet classes and my love affair with the stage began. As an adopted, only child, I spent happy childhood years playing make believe, dancing and performing for the menagerie of household pets I convinced my parents to adopt.

After graduating college and working for three years as a primary school teacher, my big break came, and I followed my dream onto the stage, as an actress, dancer, choreographer and director.

What are some your earliest adventures as a writer?

After my career on the stage, I became a Stress & Life Skills Therapist and Speaker in the field of personal and professional development. This was when I began writing articles on mindset, spirituality and life for magazines.

Before we chat about your latest book Evil on the High Seas, let me ask you about your favorite reads. What’s your favorite genre to read? Is it mystery? If it is, then I’ve got quite a few questions lined up for you! ;)

Yes, mystery or psychological thrillers (not too graphic) are my favourites. Even as a child, I loved to escape into the pages of a good book, enthralled by human behaviour and why the characters did what they did.

I loved reading the mysteries of Enid Blyton and Laura Lee Hope, while Lewis Carroll’s crazy cast in Alice in Wonderland had me captivated by their absurd antics. As I grew older, Agatha Christie novels became my obsession because of her multifaceted characters and plot twists. Deep thinking has always been my go-to place, and now as an author myself, I love to lace my stories with the complexities of human psychology and lead the reader down the rabbit hole.

What, according to you, is the key feature of a mystery? No one seems to agree on this one. Some say it’s the final unraveling, some claim it’s the process of deduction and some others believe that everything depends on how intriguing the characters turn out to be.

As Agatha’ Christie’s leading detective said, “It’s all about the little grey cells.” I think that’s why readers love mysteries. They pit their ‘grey cells’ against the author to see if they can figure out who-dunnit before the big reveal. But it’s more than that, there must be a believable motive, opportunity and driving human passion behind all good mysteries. So even if the butler did do it, the bigger question to answer is why!

Okay, this question might seem like putting you on the spot but I like to do this to authors and readers! You are stranded on an island and you can only take three books with you, what would they be?

Two would be non-fiction — The Book of Urantia and Vasitha’s Yoga. The third would be my childhood favourite, Alice in Wonderland.

Since your book is inspired by Agatha Christie (one of my favorite authors), I’m guessing you’re a fan. Who is the Christie sleuth of your choice?

Now this is a tough one. I love Hercule Poirot, the famous Belgian detective with his persnickety ways and brilliant powers of deduction. Then there’s Miss Marple the unassuming spinster from St Mary Mead, with an ear for village gossip and an eye for clandestine affairs.They are sleuthing opposites and it would be remiss of me to try to choose one or the other.

Your book Evil on the High Seas released recently. Tell us about it.

There’s evil on board the luxury expedition ship, the Silver Galapagos, but no one suspects it. Except for Diana Daniels, a successful management consultant whose rare insight into human behavior and highly developed intuition tell her that not all the passengers are seeking a carefree holiday. Though still struggling with the recent loss of her husband and honoring his request to scatter his ashes in the Galapagos Islands, she becomes intrigued by a mysterious woman in white who arrives at the port of departure.

After discovering that the woman in white is Celeste Constanzo, widow of deceased Mafia boss, Joe Constanzo, Diana is warned away from the notorious crime family by fellow traveler Detective John Nash. But because of their shared widowhood, Diana finds herself inexorably drawn to helping Celeste when the mysterious stranger confides her fear of being murdered by her three adult stepchildren.

When Celeste, along with five-million-dollars-worth of jewelry disappear after the Captain’s cocktail party, Diana is certain that her suspicions have been realized. With Detective Nash’s reluctant assistance, she embarks on her own journey to solve what she’s sure is the murder of the woman in white.

But without a body, her theory is impossible to prove. With multiple suspects and only a couple of days until debarkation, will Diana find the jewelry, the body, the author of the anonymous letters, and the murderer who’s still on board?

With no other choice but to step up and forge a new single life for herself, Diana employs her exceptional skills and gritty determination to solve the mystery of evil on the high seas.

What was the biggest inspiration behind this book?

Being a highly intuitive writer, I knew that one day I’d write murder mysteries. So, I honed my mystery-writing skills in my previous books, a romantic suspense, Retribution, and a romantic mystery, Island of Secrets, before leaping fully into the mystery genre.

And when I visited the Galapagos Islands in 2017, I knew that would be the location of my first Diana Daniels Mystery. The moment I set foot on the dock the story beamed in. Because of my theatrical background, I see my stories as a movie playing out in front of me. My job as a writer is to capture it in the written word.

I’ve seen you post pictures of the exquisite location that’s supposed to be the backdrop of Evil on the High Seas and they’re beautiful. Why did you choose this setting?

There’s a certain mystery inherent in the Galapagos Islands. Their remote location, lack of human intervention and the mystery surrounding the unsolved murders of the first European inhabitants all added an undercurrent of tension to the location which I weave into the story. 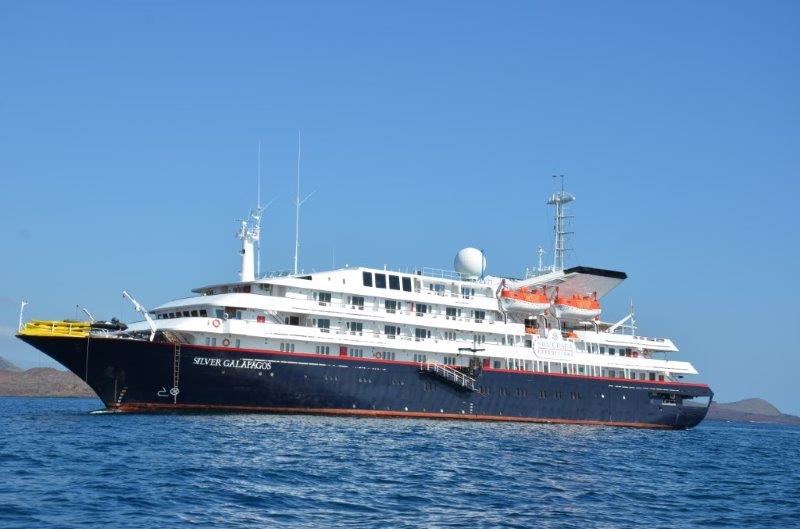 This is the first book of a series featuring Diana Daniels. How would you describe her?

She’s a smart, sassy, fifty-something recruitment specialist engaged by major corporations to recruit and train the right person for the right job at the right price. Over the years, she’s developed a highly tuned intuitive sense about people and she’s forever applying the Myer Briggs personality test to everyone she meets. She’s a feisty, opinionated and gritty heroine. Once she’s onto something she won’t let go, even if it means she might be in danger. Diana’s a tough cookie with a marshmallow center.

What are your plans for the series?

I designed the Diana Daniels Mysteries as a global series with each book set in a different location; locations I’ve visited throughout my life. And now that Diana is a widow, traveling to these exotic locations is high on her bucket list. But everywhere she goes, trouble follows. Surrounded by shifty characters, strange happenings and secretive rendezvous, her long-awaited holidays quickly turn to murder, mystery and mayhem that only she is destined to solve.

Expanding on the traditional sub-genre of the culinary mystery, the Diana Daniels Mysteries could be thought of as cocktail mysteries. Each installment in the series features a different cocktail which is Diana’s drink of choice for that holiday, and the recipe will be included at the end of the story.

Further books planned in the series include locations such as the exclusive guest house of Giraffe Manor in Nairobi, a luxury hotel on the Amalfi Coast, a privately-owned celebrity home in Santorini, a boutique hotel on a secluded beach in Vanuatu, and more.

Do you have any other work in progress?

Diana Daniels Mysteries, Book Two, Killer in the Outback, The Dreamtime and a Deadly Kiss, is almost completed.

While holidaying in the exclusive El Kwestro homestead in the Australian outback, Diana is commissioned by an Aboriginal elder to solve the murder of his granddaughter, but with another body found, Diana must solve the ancient mystery behind these killings and stop the killer.

Book Three, Murder in Manhattan, A Very Cosmopolitan Mystery, is waiting in the wings.

Many of our readers are aspiring authors. What advice do you have for them regarding the publishing process?

1. Study the craft of writing as much as possible and remember, good books aren’t written in 30 days.

2. Write, write and write some more.

3. Then edit, edit and edit some more. Every sentence must have meaning!

4. Don’t be in a rush to publish or you may regret your first attempt.

5. Get it right, then move onto the next one.

Being a part of the Indie community, I’m always looking for indie book recommendations. Do you often read Indie books or those that aren’t published under big banners? If so, tell us about your recent Indie reads.

I read what takes my fancy rather than who’s published them. Currently, I’m not reading anything as I’m head-down, tail-up finishing Killer in the Outback and I don’t like to read other authors when I’m this close to the finish line.

Lastly, a message for our readers.

Be kind to authors. We’ve poured our heart and soul into our book babies 😊And, we need reviews to survive!So, if you’ve enjoyed a book please take the time to leave a review.It’s like gold to an author.

Thank you so much for taking the time to do this interview with Crazy Curious Reader. I’d love to have you back for more interviews and guest posts in the future.

I look forward to it. Thanks for having me.❤️